As some know, I am originally from the emerald-green water and sugar-white beaches of Pensacola, Florida. Unfortunately, that picturesque description of my hometown is facing a tourism industry crisis of epic proportions due to the widening Gulf of Mexico oil spill – courtesy of British Petroleum (BP).

Most everybody knows the tourism industry is the lifeblood of the Gulf Cost and especially Pensacola. According to the Pensacola Chamber of Commerce’s website, “More than 3.7 million visitors come to the Pensacola Bay Area each year, leaving a $1.2 billion impact on the local economy and helping to employ 18,000 residents.” That is quite an economic boost for a city of approximately 50,000.

To make matters worse, this environmental calamity has occurred just as the highly profitable summer tourism season begins. Tourists have rented condos and beach houses, booked fishing trips, made plans to attend the annual Pensacola Beach Air Show and much more. It is an economic meltdown in the making. 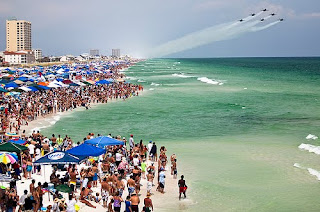 What is a local tourism official to do?

If I were suggesting a basic plan of action, for starters, I would advise that ensuring everyone’s safety and prompt/sweeping clean-up measures are paramount. With oil sheens being spotted less than 8 to 9 miles away from one of the world’s most beautiful beaches, people need to know they are safe and the city is prepared.

Additionally, the city must develop and ramp-up a comprehensive public relations campaign that launches an aggressive national media blitz to ensure people keep booking trips to Pensacola and would focus on the fact that there are so many reasons to visit the Panhandle. This media blitz should include editorial briefings, interviews, opinion editorials and letters to the editor, and social media placements.

While the Gulf beaches are the main attraction, officials should promote coastal waterways, bays, bayous and rivers that may well be untouched by the oil during the summer season. Moreover, the city has other tourist attractions such as the National Museum of Naval Aviation, Pensacola Naval Air Station, Fort Barrancas and Fort Pickens, Zoo, T.T. Wentworth Jr. Florida State Museum, golf courses and more.

Hopefully, for the city’s sake, its PR/marketing campaign is in high gear and that tourists will continue visiting the place I love to call home.